Edmonton’s Anti-Icing Program: What You Need To Know 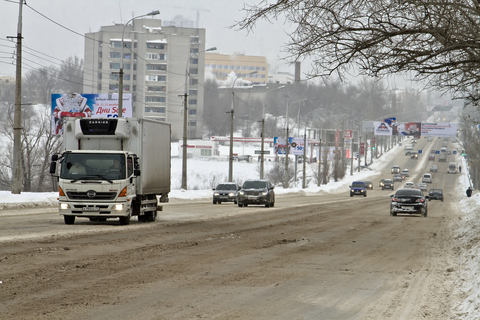 Traditionally, the City of Edmonton has used sand and gravel to combat icy roads in the wintertime. However, in early 2017 they chose to run a pilot program utilizing calcium chloride with an added corrosion inhibitor to keep city street clear. After initial success at the beginning of the year, the pilot was expanded into winter 2017 – 2018.

There have been mixed reviews on this project so far from a number of different parties including drivers, city council members, and experts in the field. Read our complete guide on the City of Edmonton’s new anti-icing program and how it will affect your vehicle.

Anyone who has driven on Edmonton’s major roadways in the spring can tell you the frustration of using gravel. Even with legally required mud flaps, vehicles constantly kick up sand and gravel as they drive. If you’re unfortunate enough, that gravel will get kicked up right into your windshield. Take a look around next time you’re in a parking lot and you’re bound to notice cracked and chipped windshields. Even take a look at your own vehicle and you may be able to find chips in the paint caused by springtime gravel. Calcium chloride is a liquid solution, meaning that there will be no extra rocks on the roads come springtime.

In addition to there being no additional rocks on the road to wreck windshields and paint jobs, there is no gravel to be dealt with after all the snow has melted. City crews spend several weeks cleaning up gravel from city streets once the snow is gone. This additional time means additional money.

Unlike sand, which is applied after a snowfall, calcium chloride can be applied to city streets as a preventative measure. When the snow actually does start falling, the calcium chloride will prevent snow from sticking to the road and actually encourage it to melt. The result is better road conditions even before the snowplows get a chance to tackle the streets.

Bring on the rust

Despite claims that calcium chloride is less harmful than sodium chloride, and that a corrosion inhibitor has been added to the solution, experts remain skeptical. Calcium chloride is still a form of salt. All of the properties that make it an excellent de-icer (remains in place, easily distributed, prevents snow from sticking) are what make it so dangerous to vehicles.

Your vehicle isn’t the only thing put at risk. Bridge decks and concrete barriers are also at risk for corrosion. In fact, salt corrosion has been a major problem in eastern cities such as Toronto and Montreal that have used road salt for years. Edmonton’s fluctuating temperatures, particularly in the spring, help to encourage and accelerate frust formation.

A significant downside is that winter salt brine tends to be most effective in temperatures above -18 C. Anyone who has spent a winter in Edmonton can tell you that it’s not unusual for a cold snap of -25 C or lower to hit several times throughout the season. Though it may not be the seasonal norm, it’s certainly worth accounting for.

What are the alternatives?

Several cities throughout the United States, and a handful throughout Canada have utilized beet juice as a means of snow removal. When applied to streets before a storm, the sugar from the beet juice prevents the ice from sticking to the roads. Beet juice can also be mixed with saline and sugar to boost effectiveness and lower its freezing point. In fact, this mixture can be effective in temperatures as low as the -30 C mark. Of course, the greatest advantage here is that it’s organic and significantly less harmful to the environment than traditional salt brine.

The state of Wisconsin is known for its cheese. With a huge cheese manufacturing industry comes the byproduct of cheese brine. The cheese brine naturally contains chloride compounds, making them incredibly effective in preventing snow and ice build up. Like beet juice, they have a lower freezing point than traditional road salt brine, and they are significantly less harmful on the environment. Pickle brine has been used in similar ways in other states.

A team in the Netherlands is working on creating a de-icing product made from biomass, which is the technical name for leftover organic matter like grass clippings or kitchen scraps. While it’s a few years away from commercial distribution and comes with a hefty price tag right now, scientists hope they can provide a powerful de-icing solution that will be easy on the environment.

How to protect your car

While the City may not be changing its de-icing strategy any time soon, it doesn’t mean that your vehicle is doomed to rust. There are a number of things you can do in order to keep your vehicle rust-free and running smoothly.

There are a number of different coatings available on the market to help protect your vehicle from rust. These include undercoatings, protective films to minimize paint chips and scratches, and rust-proof waxes. Investing in these types of solutions can save you more costly bodywork and repairs down the road.

Washing your car regularly throughout the winter can help remove salt buildup and prevent corrosion. It’s critical to remember to wash the vehicle’s undercarriage, as this is that part that is most exposed to the road salt. Regular undercarriage washes when you get your car washed can help with this.

Sometimes accidents just happen, regardless of how careful you are. It can be anything from a door ding or small scratch, to a large dent or scrape. If the metal of your vehicle is exposed, it’s important to get it touched up and re-sealed as soon as possible. Exposed metal is at risk for corrosion and the longer it’s exposed, the higher the risk.

Whether you need touch ups to reseal your paint, or have major body work that needs to be done, Freeway Auto Body can help. Contact our team today.